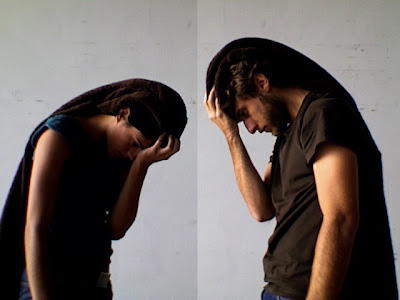 Unfolding was started in the context of project Looping. During Looping, Unfolding had the collaboration of Joclécio Azevedo and the production assistance of Lígia Teixeira.

Unfolding is the action of disclosing, of gradually revealing something. A mysterious moment is implicit : expectations rise as the object is uncovered. In the moment just before the object is recognized we attempt to postpone revelation and prolong our expectations. The body, in its imminence of revelation, assumes the dimension of our imagination and experiences a metamorphosis.

Sofia Dias and Vítor Roriz collaborate since 2006. Until now, they have presented: 25, Visegradska (2006); Under(the)line (2006); Sand Castle (2007), Involuntariamente (2007), Again from the beginning (2009), Unfolding (2009) and O mesmo mas ligeiramente diferente (C.Instável 2010). Their works have been presented in Portugal, Spain, Switzerland, France and Germany. They are associated artists from O Espaço do Tempo and count on the regular support of Bomba Suicida.

Unfolding is available for touring