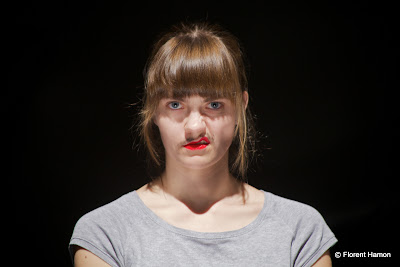 This piece was inspired by sleep. By the fact that the actual location of a sleeping body becomes unimportant for its owner. A sleeping body/person has an existence that is out of control and out of context (disconnected from the actual surroundings). Thus the sleep can be imagined as a location that eliminates every other physical location and becomes the essential location. While sleeping we are consumed by our necessity to recycle, rebuild and re-organize ourselves in order to continue functioning while awake in the over-connected everyday reality. Sleep is our ultimate home. Home that we can't leave, rent or sell.
This body on stage displaces itself throughout a series of recycled (everyday and performative) materials. Following these actions, it tries to rebuild and re-organize itself in order to continue performing.
Its nowhere-arrivals are accompanied by the mechanical and mental sounds of changing places: by a subway-musicians' hit-parade and by an elderly voice anchored in its monologue of memories.
Equilibrium of a flying airplane: speed vs gravity.
Nele Suisalu, June 2010 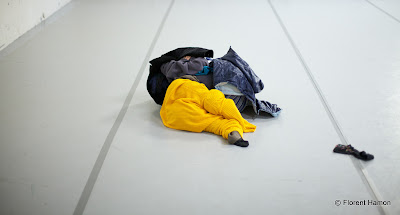