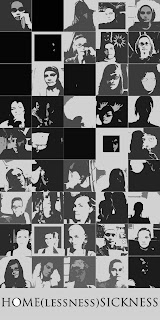 When I was a little girl I was absolutely convinced that every evening, just before I fell asleep, someone was telling me stories. Naturally, I was the heroine, but never was I as beautiful as I was strong. Never a princess waiting for her prince. There was no sleeping forest either, only labyrinths of tubes. But I always found my way out of them.
I have been trying so hard to remember what the voice sounded like. At the same time, it is highly possible that I am merely watching a screensaver on my computer.
“Privacy is dead! Get over it!” says a private detective on CNN. They are talking about internet again and I get to the conclusion that the only home, as the root and the reflection of a person's identity, resides in his sleep. There is the only 'here' that truly belongs to the person dreaming of it, even if it is not real. At least it is not virtual either: not uploaded nor downloaded.
There is no specific 'here' when people are awake. Everywhere is here at the same time. In this reality of Facebook/Twitter/etc the physical place is the less important. To let the others know that we are or will be 'there' is more important than to actually be or go somewhere.
A chronicle of the nowhere-arrivals. Regular changes of the content of a suitcase, dreams of/in the trains, turbulence, anxiety about the changes in the travel schedule, asking someone to post the left-behind things. No-time-adaptation, being away, never returning, tiredness of unknown, homesickness, homelessness. Joy of meeting new faces, inability to remember the names. No habits, feeling of freedom, routine of changes. Being contaminated by others or occasionally fighting for staying who I was. Homelessness-sickness. Tensions between here and there.
By virtue of the everyday virtual practices, a lot of the relationships between people are involuntary, almost passive. They exist almost despite of them and thanks to the external virtual something connecting them.
May I have your address? I might want to send you a postcard.
Persons as consistent entities seem to be dissolving into this over-connected reality. A person is stretched out by his networks. His identity finds itself suddenly “homeless”. In this context, the 'I' (me) stands only for individualism, but is fulsomely meaninglessness in its incoherent personal story. No time for a synthesis. People are fantastic monsters with several heads, using the one that is the most suitable for the situation speeding by. They are continuously overcoming the conflict between the galloping everyday life and the eternal slowness of habits, traditions and spirituality.
Is this a freedom or an exile?
Being overwhelmed. The only actions - I can carry out - are my fantasies.
This is an attempt to circulate between 'here' and 'there' that might end up being interchangeable. Could that mean staying put? To play with the time that is measurable by instant-messaging and by the growth of a tree. To concentrate oneself in a situation that Miguel Benasayag has described as “when everything becomes possible, nothing is possible anymore”.
Thus I am seeking for the equilibrium of a flying aeroplane: speed versus gravity.
Posted by Nomad'act at 4:43 PM